Never before has a giant pink bunny stick caused so much confusion, glee and discomfort among the masses. 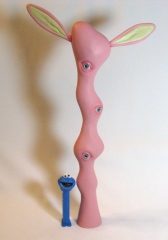 Never before has a giant pink bunny stick caused so much confusion, glee and discomfort among the masses. When I heard that Mark Ryden was going ahead with his first piece of vinyl, I was thrilled. After all, his artwork is freaking amazing. I was however, a bit surprised when I saw that YHWH was the creation he decided to use as his 3D debut. Let’s face it, it isn’t exactly what we’ve come to expect from his artwork. Sure, from a textural standpoint, it looks the same, but most people were surprised that he didn’t go with something that was less… abstract.

Now, public opinion on this piece is pretty well split. Half of the people I know think that it is creepy and they would never want it in their houses. The other half… including people like myself and even my Wookie mom, think that it’s pretty damned cool.

So what is it? Beats the hell out of me. It is named YWHW, which is one of the many names for God. It even comes with a great box and instructions on how to position it and how long to spend praying to it each day.

From a vinyl standpoint, I’ll be honest. It is kind of hard to stand it up next to some of the other great artists out there, but as an art piece if definitely has charm. Not only does it have the cool abstract shape and the ever so cute, yet random, bunny ears, but it has some fantastic eyes.

YHWH is made up of entirely pink vinyl with light paint application on the ears. The eyes seem to be what makes it or breaks it for most people. They look extremely realistic. Sure, they say that they are acrylic, but I’ve got a sneaking suspicion that they were stolen from the heads of babies and then shellacked with an epoxy. You can actually spend a decent amount of time looking into the eyes. It feels like they look back. If you think that is awesome, then you’ll want to buy this one. If not, stay away.

On one side note, I do have a complaint, but it has nothing to do with the piece itself. This is a pretty expensive piece. Sure, at over 15″ tall, it is pretty substantial, but the main problem is the size of the edition. They made 2000 of these. That is just too much. A lot of vinyl collectors enjoy the exclusivity that comes along with small runs. However, this takes it up into Gentle Giant Territory. That is just a shame.