Review: ‘Shadows Of The Damned’ From EA For XBOX 360

If you are in the mood to beat the crap out of something evil, check out our new review on Electronic Arts’ ‘Shadows of The Damned for the XBOX 360.

‘Shadows of the Damned’ is violent, hellish, crude, and damned fun! 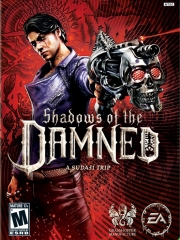 Garcia Hospur wasn’t joking when he told the love of his life he’d go through hell and back to be with her. In Shadows of the Damned you do just that! You are the worlds best demon slayer and that makes you hells most wanted human. One night coming home from work things just don’t feel right and well, they sure as shit aren’t! The lord of darkness steals your girlfriend Paula and you jump right into hell after them. Equipped with your demon killing gun named Boner and you’re floating skull pal Johnson Garcia treks through the inhospitable landscape of hell watching the love of his life get eaten, raped, mutilated, and more. Between the sushi lamp trip hop music, the vulgar dick jokes, the incredible old school giant boss battles, and the few 2D side scroll-er missions this game has incredible gore filled charm. Yet underneath all that charm is a well built non stop action game that never lets up.

‘When evil demonic creatures kidnap Garcia’s girlfriend, it’s up to him to travel to the City of the Damned to get her back. Aided by a former demon with the ability to transform into an array of vicious weapons, Garcia will once again take on the mantel of “demon hunter” and rip apart the horrifying forces of the underworld to protect what he loves most. Players must harness the power of the light to fight the army of the dark in unique light versus darkness gameplay that will forever change the way gamers perceive puzzles, combat, and terror. Combining the punk rock style of Suda 51 with the legendary horror design of Shinji Mikami, Shadows of the Damned will take gamers on an in-your-face thrill ride through demon-torn towns, shadow infested forests, grimy sewers and more. Featuring the most twisted boss battles ever seen, warped visuals and intense visceral combat, Shadows of the Damned will challenge gamers to break through the ultimate head-trip to help Garcia rescue his tortured girlfriend from the clutches of a mysterious enemy.’ 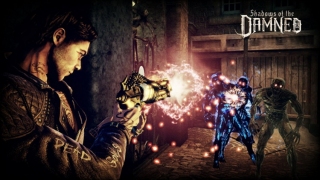 ‘Shadows’ was developed by Grasshopper Manufacture and published by Electronic Arts. I played the Xbox 360 version, but there’s also a PS3 version. This game comes from the minds of Goichi Suda, better known to gamers as Suda 51. His games include ‘Killer 7’ and the ‘No More Heroes’ series. I recommend checking out his wiki page because he’s one hell of an interesting guy in the video game world and beyond. The other big shot involved in this game is Shinji Mikami, the brains behind all the ‘Resident Evil’ games (except 5), ‘Vanquish’, ‘Devil May Cry’, ‘Dino Crisis’, and many other great titles. These two worked together before on Killer 7, a game that may have some flaws but it’s worth a run through just due to it’s sheer bizarreness. These two men went off together drank a lot, wrote the script and beat the hell out of a group of mimes for a few days. Then they got to work!

What they’ve made is really a game that doesn’t stop. Meaning it keeps upping everything you have to do. If you get a new addition to your weapons then you damn well better be ready to use it cause you’ll have to, to take out certain enemies. This is one of the many things I really like about the game. There’s nothing worse than getting a ton of weapons that don’t really matter much other than what you think looks coolest when you’re walking around. This game forces you to bust out your entire arsenal and get pretty good with it. One of the big gimmicks in the game is that certain boards get covered in darkness. That means the entire board turns dark blue and you’ll only survive a few moments unless you shoot a light burst into a glowing sheep head. This sounds insane and it kind of is but it’s been implemented really well in this game.

You’ll be in the middle of a battle when suddenly the darkness comes. You’ll have to dodge demons and either track down the goat head (listen for the bleating) or find an exit to the darkness.

On top of the darkness mechanic you’ll find many different demons throughout your journey in hell. All of them have different weaknesses and you need to figure that out by trial and error with your guns. 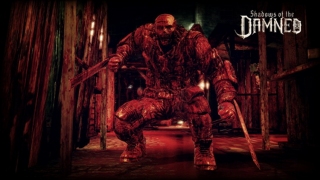 Once you’ve blasted your way to the end of a level you will of course battle a boss. As stated earlier, these bosses are usually pretty huge and can take up most of the screen. This is old school awesome and, to make matters both worse and better, they are pretty hard bosses. You usually will need to find their weakness then exploit it until suddenly they morph into something else or their weakness changes. This never feels cheap and normally these changes are shown in a cut scene giving you a little hint of what you should try. What makes these giant behemoths really rough is that they don’t have a health bar and not all of them show signs that you’re really damaging them. It can get pretty intense as some of these battles lasted upwards of 30 to 40 minutes and I wasn’t 100% sure I was doing it right till they dropped dead.

The level designs are great. You move from dilapidated farmhouses, meat factories, flesh castles, surreal sex clubs, and all around creepy mansion-ish levels. In my favorite level, you tear through the darkness hunting for a sex club, you run up the thighs and ass of a demon stripper to find the entrance. This type of vulgar craziness is littered through out this game. As you move from level to level you’ll find children’s books that contain the back story to many of the insane and creepy bosses. These are read by either Garcia or Johnson as they make vulgar comments through out the story book.

The soundtrack’s odd as hell mixing trip hop, metal, orchestral, and standard rock tracks. These all come together to form a fitting musical landscape to this psychological barrage of dick jokes and gory hellish imagery. If you can track down the soundtrack I recommend getting it even if you hated this game. It’s just pretty solid tunes. 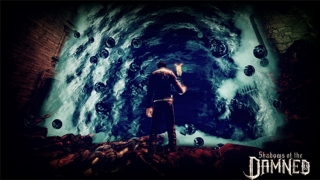 Honestly my only real complaints with this game would be at incredibly rare times the camera gets a bit twitchy and once you beat the game you aren’t able to restart it with you’re leveled up weapons. The dash in this game can be kind of annoying The game could be longer but it clocks in at the normal 10 hour length most 3rd person action games run.

I give this game 8.5 out of 10 wookies. It’s got a charm all on it’s own and ends up being a very solid action game.