So for some reason the powers that be thought inviting a foul-mouthed fat head like myself to a press screening of The Guard was a good idea. I assumed they didn’t realize what they were doing and took’em up on the offer. This meant I got to fake like people give a shit about me and my words and get my self into Sony Studios. I wish I had some wacky tale about me bumbling my way around the studio or that I stole a bike from set Pee-Wee style and lead a chase throughout the studios until I got caught and they offered me a deal to buy the rights to my life story. I’m pretty sure they’d cast Jason Statham to play me. We’re both bald, kick serious ass when attacked by terrorists, ninjas, robots, or flying terrorist ninja robots. I guess mainly because we’re both bald. Also I speak in a British accent but that’s more to annoy people since I grew up in New England. Anyway, I got this movie deal going with Sony Studios so I guess I don’t need to write up a review of the film The Guard.

Suddenly the theme to Sesame Street emanates from my crotch, it’s my ringtone. After a heated twenty minute phone call with my editor, I kick a hole in a wall and find out:

A) I should probably change my ringtone if I want to be taken seriously
B) I randomly believed I had a movie deal with Sony Studios but don’t
C) My editor would rather “light his nuts on fire then talk to me one more second”
D) I should probably tell you my thoughts on The Guard and get the hell on with it! 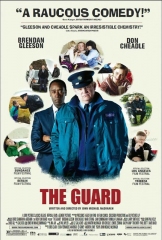 Right at the start I’m gonna say I really enjoyed this film. It’s a nice throwback to the old anti-hero westerns where men had a somewhat skewed moral code but it was theirs and we had to either accept it or back off. John Michael McDonagh built a wonderfully off-beat character in his script and Brendan Gleeson truly brings Sergeant Boyle to life. The film’s definitely a dark comedy and reminded me of In Bruges which also starred Brendan Gleeson and was written and directed by Martin MsDonagh (The Guard’s writer / director’s brother.) Most of the jokes play really well and you’ll find yourself laughing at things you shouldn’t exactly find funny.

This is easily the best contemporary western with a 70’s feel in its style while not relying completely on either shtick to hold the film.

It stands strong on a solid script and a really impressive cast. Below I gush about Gleeson but before that I’d really like to say how awesome Mark Strong was, as Clive the criminal that’s tired of the daily ins and outs of crime. Clive got into crime for the thrill- the gun fights, and the lovely ladies. He was hoping more for the romanticized life of John Dillinger than the reality that they’re all just businessmen mildly avoiding cops that don’t really care as long as you pad up their wallets. 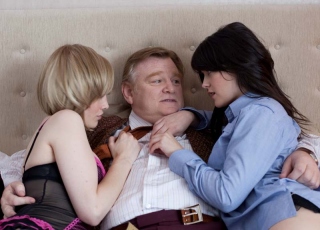 The star of the movie is Gleeson and he truly owns this film. Even if he doesn’t win one of the many important statues, he should rest assured that he’s won an award… in my heart, for his portrayal of Boyle. While a lot of films have drug using, foul-mouthed, prostitute-loving cops, this is one you really like and stick with throughout the film. You learn a lot about the character and what’s important to him. You can’t help but side with him even when you don’t agree with his actions. This is where the script really shines and Gleeson’s honed skills have built a truly memorable character. In many ways Gleeson plays a much ruder and more realistic Rooster Cogburn type.

The relationship between Don Cheadle’s FBI agent and Gleeson’s Boyle is great. You genuinely like watching these two misfits become friends that last a lifetime. While it’s got some mush and a little filler, most of their relationship is believable in the construct of the film. By the end you’re rooting for these two to take out the bad guys, get the girls, and ride off into the Irish sunset. Spoiler: There really aren’t any girls to get but there are a couple prostitutes Sergeant Boyle sees that are damn hot! 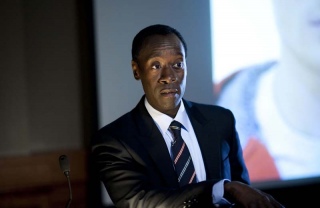 Alright, I’ve gone on and on about what I liked but really the film’s far from perfect and I do have a few issues. My main issue was the film drags at times. It has a run time of about 96 minutes and truly it just needed something to get it moving a bit more near the middle. I wasn’t bored but I just got that “wanting to check my watch” (I usually put that kind of thing in quotes or hyphenate the whole thing) feeling. There’s a lot of great character moments in the film but it would have been nice to at least get one big middle fight or action sequence. Just felt that it needed something that really gets you on your toes again and really pushes you towards the badass climax of the film. My other big problem was that I honestly didn’t care about the Deputy that gets murdered. His stuff was funny but I never really felt connected to him or, later, his wife. This makes Boyle’s reason for taking on the villains at the end seem a bit thin. This stuff didn’t ruin the film for me but I felt it while watching the movie so it’s definitely there and worth mentioning.

Sony Picture Classics The Guard is a solid dark comedy / contemporary western that should be seen by all looking for a break from the ultra budget 3D explosion event films of the summer. Despite its flaws, this film will keep you entertained and fill you up like a good home cooked meal (mom being writer/director John Michael McDonagh).

The synopsis (from IMDB):

‘Sergeant Gerry Boyle is a small-town Irish cop with a confrontational personality, a subversive sense of humor, a dying mother, a fondness for prostitutes, and absolutely no interest whatsoever in the international cocaine-smuggling ring that has brought straight-laced FBI agent Wendell Everett to his door.’