“Just got stopped by a ton of cops,” she said on Twitter. “My costume is illegal — the butt. Sigh.”

Former “America’s Next Top Model” winner and popular Internet geek tease, Adrianne Curry was kicked out of Comic-Con last weekend due to her less than modest Aeon Flux costume.

“Just got stopped by a ton of cops,” she said on Twitter. “My costume is illegal — the butt. Sigh.”

Curry was told to cover up her behind, with a shirt around her waist, until she could change.

“They picked on me to make a point, probably cause i have some minor level of fame,” said Curry, who added she chose the original 90’s MTV costume in order to stay true to the original and not the 2005 Charlize Theron film.

“I thought she was the WORST Aeon imaginable,” she said of Theron. “No sex, t-ts, skin… nothing.”

“Please, stop comparing my costume or associating it with that sh-tty Aeon Flux movie. Love theron, not as Flux. Apparently the San Diego police are unfamiliar with a screen accurate version of Aeon Flux.” 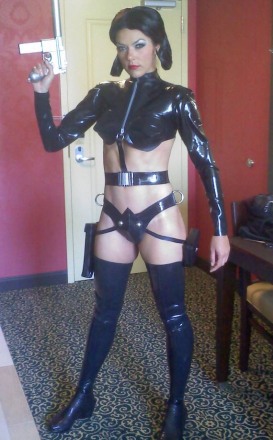