see how everyone from Peter Pan and Wendy to Lilo And Stitch would look in their prom photos.

I was in Target last night and I heard two women who were school teachers talking about how they only had thirteen days of classes left before they were free from their students. That means that not only is summer coming faster than I realized, but we are smack dab in the middle of prom season.

Enter artist spiceystewdemon. She has taken thirteen Disney character couples and re-drawn them with prom makeovers.

The characters included are: 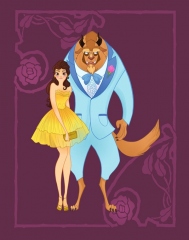