Armed America: Portraits of Gun Owners in Their Homes

Janie’s got a gun… and she won’t shoot you, unless you step a foot onto her property or tell her she looks fat in that dress. 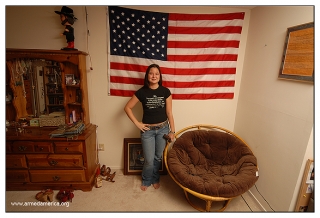 Armed America: Portraits of Gun Owners in Their Homes is a series of photographs taken by Kyle Cassidy.

From his website:
“The question of gun ownership in America is a fractious one. Even the number of guns in the country is in significant debate. The National Rifle Association (NRA), the country’s largest pro-gun lobbying group, quotes the Bureau of Alcohol, Tobacco, Firearms and Explosives (BATFE)’s estimate that in 1999 there were about 215,000,000 guns in America and one gun in about half of the households in the country. The Brady Campaign (the nation’s leading anti-gun coalition) estimates there are 192,000,000 guns in America, owned by 39% of the population.”

As the name implies, the collection showcases a series of photographs depicting gun owners and their guns. I’m sure this project also tries to aim at distilling the myth that all gun owners are crazy, redneck, white trash psychos, and that in actuality they are all very normal… well that’s certainly up for debate. Because quite frankly, I don’t think I’d feel comfortable with any of them walking behind me, hell, I wouldn’t feel comfortable allowing any of them within a one mile radius of me.

To see more photographs, head on over to Kyle Cassidy’s website.

One thought on “Armed America: Portraits of Gun Owners in Their Homes”