‘Asians In The Library’ Girl Gets Awesome Musical Rebuttal

It’s been a rough day for the “Asians in the Library” girl (we still aren’t going to call her out by name, she’s pretty much done enough damage to herself already). She’s formally apologized through the UCLA bruin newspaper. The president of the university has come out to publicly disavow her comments and she’s even been subject to death threats (Seriously?!?). This seemingly self-absorbed college girl just had a new epiphany… apparently, ignorance isn’t always bliss.

Thankfully, at least the internet has a sense of humor about these things. There have been several responses over the last 24 hours, but none of them have been so artful and entertaining as this one from Youtuber Jimmy. He pretty much wins and now we can all move on to something else. 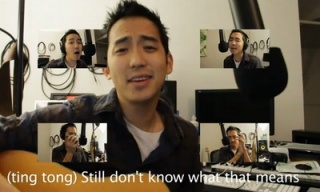