Mr Gardner said it crossed his mind to use his pocket knife to remove the unwanted gear from his ear. But luckily he decided to use a spoon instead. 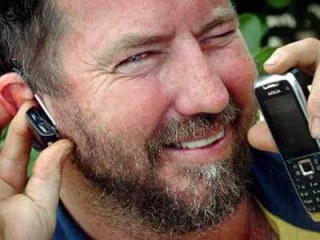 Gye Gardner broke the earpiece to his phone. “I hit my ear on the boom of my truck and broke the headset of my phone,” Mr Gardner said. “So I got some superglue and glued it back together – and that was … when my boss rang.”

The truck driver said he usually had the phone’s headset in his ear most of the day. “I guess I didn’t think much of it when I put it back into my ear to talk to the boss.

“I drove from Casuarina to Rapid Creek when I realised I had done something kinda stupid.” After having the headset in his ear for more than five minutes the adhesive had hardened – and Mr Gardner found himself with a earpiece glued into his ear.

“Usually it’s in my ear all day anyway – friends suggested to leave it in there and just plug my ear into the powerpoint at night to charge it. But I did get a little worried and thought ‘This is not good, this is really not good at all’.”

Mr Gardner said it crossed his mind to use his pocket knife to remove the unwanted gear from his ear. “I realised I didn’t want to see myself going to a doctor to put my ear back on after I chopped it off. So I used a spoon.”

The 43-year-old said he scraped the earpiece out of his ear with a spoon but several pieces of skin were still stuck to the headphones.