Harry Potter + Geeks in love = One of the sweetest proposals we’ve seen in a long time!

We’ve had all sorts of geeky wedding proposals on the site, but very few people have gone as far as this guy did to bring his girlfriend’s favorite series of books into the mix. Here’s what he decided to do in his own words:

“Alley is a big Harry Potter geek. I say that in the fondest of manners. She’s gotten me into the theaters for the last three films, and on the couch to watch the first five numerous times. That’s saying a lot because I was jaded regarding the entire franchise, and took no shame in lampooning her interest. That is, until she got me hooked, and gladly watched as I inserted my foot into my mouth.

After the film series concluded, and seeing how disheartened she was that there would be no more looking forward to midnight outings to catch the first run of the next HP flick, I decided to make her a sequel.

I didn’t quite go all-out and write a killer fan-fic treatment. Instead, I created a dust jacket that would pass for a real-deal sequel, if I timed it right and had the element of surprise on my side.

When I finally got the ring, I commandeered her copy of the Deathly Hallows and did something that might otherwise seem sacrilege to any other hardcore potter fan… I hollowed out a portion of the book to seat the lower half of the ring box inside.

I added a neat feature involving some ribbon that translated quite well, in the context of marriage, paired with a clever note… I won’t spoil it. Check the images for yourself :)”

We’ve got to give this guy a lot of credit for something that could have really backfired. It’s one thing to take a book and use it to create a fun and geeky wedding proposal… but to take her copy of Harry Potter and The Deathly Hallows?!? He’s lucky she didn’t beat him over the head with it before saying yes! 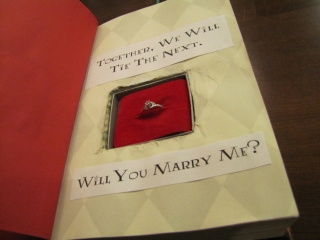