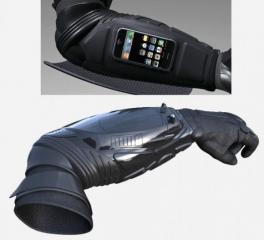 Christmas may have just passed, but I already know what I already know what I want next year. Created by ArmStar, check out this awesome Batman inspired utility gauntlet made from Kevlar that also includes an iPhone dock, a built in stun gun, a 720p wireless camera and a flashlight. All that’s missing is talon spikes!

The creators are hoping that the BodyGuard Armored Gauntlet will help save lives as it’s being marketed towards law enforcement and homeland security agents. So geeks everywhere, don’t expect to actually own one of these just so you can wear it to a comic book convention.

Here’s some additional information from the official site:
ArmStar is dedicated to providing the future of self-defense in the form of a wearable, hands-free, less than lethal system that includes an Electronic Deterrent (ED) that produces a loud crackling electric arcing sound from the electrodes that can, as an electronic control device (ECD), also apply an electric shock to the aggressor for pain compliance applications. Other options, such as cameras and flash lights, will assist in evidence collection and dissuading the opponent from escalating the situation by recording video evidence. These options form an Aggregated Technology Deterrent (ATD) to minimize the likelihood of escalation. Armstar will provide these new devices to law enforcement, homeland security, and DoD professionals for a wide range of applications.

Inspired by the events of a mountain lion attack in Orange County California (see “The Story”), inventor David Brown developed the wearable device to protect people from being attacked. As a camera operator, David was working with actor Kevin Costner, now partner and co-owner in Armstar. The design of the invention attracted other luminaries such as John Bunnell, featured in the TV series “Cops”. Over the past several years, the BodyGuard has evolved into a platform system that can be worn for personal protection and includes a variety of modules to meet the needs of military and law enforcement reminiscent of the fictional representations in “Robocop” or “Iron Man”. However, this product was not invented for the movies, but rather to save lives and is now available for purchase.