Aunt Vivian Mysteriously Missing From ‘Fresh Prince’ Reunion, Because Will Smith Is An ‘A**Hole’

Janet Hubert tells TMZ that even after 15 years later she’s still upset with the way she was fired from the show, and blames it on Smith himself. 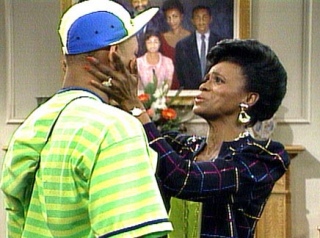 Yesterday we shared a nostalgic inducing holiday photo that reunited the cast of the popular 90s TV series “The Fresh Prince of Bel Air.” But eagle eyed readers may have noticed that Janet Hubert who played Will’s dear Aunt Vivian was mysteriously absent from the photo.

We find out today that according to Hurbet there’s a damn good reason why she wasn’t at a reunion dinner with the rest of the “Banks family,” and that’s because she hates Will Smith.

Janet Hubert tells TMZ that even after 15 years later she’s still upset with the way she was fired from the show, and blames it on Smith himself.

“There will never be a reunion … as I will never do anything with an asshole like Will Smith,” Hubert said.

She adds, “He is still an egomaniac and has not grown up. This constant reunion thing will never ever happen in my lifetime unless there is an apology, which he doesn’t know the word.”

Hubert had always insisted that Smith is to blame for her departure in the middle of the show’s run — claiming he turned on her because she wouldn’t kiss his butt. A claim, Smith had always refuted.