President Barack Obama is many things – a husband, a father, our commander in chief, and now a battle ax swinging Barbarian.

President Barack Obama is many things – a husband, a father, our commander in chief, and now a battle ax swinging Barbarian.

While he isn’t busy trying to solve our current economic crisis, he moonlights as a muscle bound warrior in search for the treasure of Stimuli while battling demons and demo-gods.

Originally believed to be an April Fool’s joke, comic book publisher Devil’s Due has come forth insisting that they are serious and readying two new titles for June 2009 featuring U.S. President Barack Obama.

The two new comics feature Obama wielding weapons of mass destruction hoping to save our country and planet:

DRAFTED: 100 DAYS: (1-Shot 48 Page Special) Devil’s Due’s original Sci-Fi hit returns with this double-sized one-shot featuring the President who could have been. Mark Powers offers a poignant look at a man the world never got to see achieve his true greatness when a race from beyond the stars drafted our planet into intergalactic war. See how he struggles, just as every other man, woman and child on Earth does in this truly inspiring story. As can be expected from Powers, there’s one other difference about our hero in this story in that due to an injury… he is MUTE. 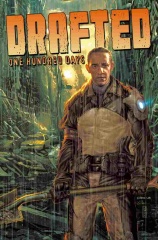 BARACK THE BARBARIAN: QUEST FOR THE TREASURE OF STIMULI: (Ongoing Series) Devil’s Due and Larry Hama (G.I. Joe, Wolverine) take political satire to a whole new level. Hama, a surprise hire to some, but not to those who truly know his tastes, will take a look at the current state of politics both past and present and isn’t afraid to point fun at Washinton’s sacred cows. In the distant future the story of Barack Obama has become a little… distorted. According to THE MADDOWIAN CHRONICLES he was the one destined to save the great republic of America and dethrone the overpaid despots of the time. Join Barack, Sorceress Hilaria, her demi-god trickster husband Biil, Overlord Boosh and Chainknee of the Elephant Kingdom. Who can the lone barbarian trust, if anyone? 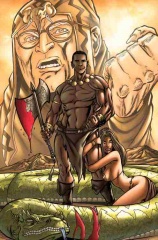 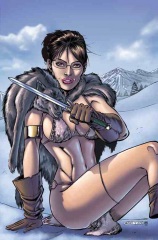