Before You Were A Monkey, You Were This Monster

I’m going to take it for granted that, if you are reading this, you accept that we evolved from apes. If that’s not the case, then the rest of this article isn’t for you. For those of you who realize the Earth is more than 5,000 years old, you also know that before we were apes, we crawled out of the ocean. Scientists have now found the fossilised remains of a 540-million-year-old creature that appears to be the earliest known step on the evolutionary path that led to us.

The microscopic critter is called Saccorhytus and it is the earliest known”deuterostomes,” the microscopic organism that eventually gave way to vertebrates. It’s easy to see why we hadn’t gotten a good look at the Saccorhytus until now, given that they are just 1mm in size and were known to live between grains of sand on the sea floor.

Researchers think that the Saccorhytus had a thin, flexible skin and muscles, and it got around by wiggling. While it does seem to share a lot of the same building blocks that we and other vertebrates have, there’s one very importing thing that it seems to be lacking… a butt hole. That means that it probably used one hole for all it’s intake and waste purposes. 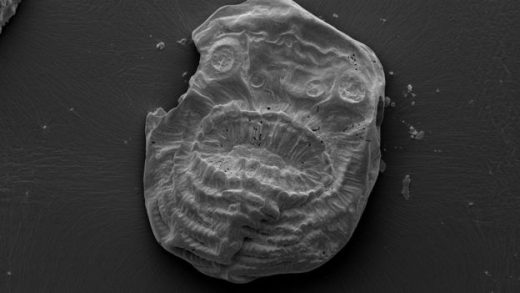