Belvedere Vodka Ad Pulled For Being A Little Too… “Rapey”

If this is what happens when you drink Belvedere, I’m glad that I’m a Grey Goose man.

If this is what happens when you drink Belvedere, I’m glad that I’m a Grey Goose man. 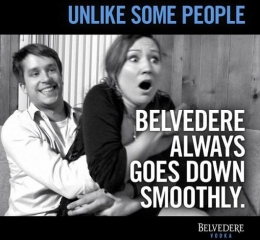 Forbes is reporting that Belvedere Vodka took this ad down just an hour after it was posted on their site. Still, they quickly became more hated than Joseph Kony wearing a coat made entirely of lolcats.

Their initial apology failed to quell the anger as it did nothing to address the subject matter, just that some fans were offended:
“We apologize to any of our fans who were offended by our recent tweet. We continue to be an advocate of safe and responsible drinking,”

Two more apologies followed later in the day, followed by this statement from Charles Gibb, the company’s President:

“It should never have happened,” President Charles Gibb said. “I am currently investigating the matter to determine how this happened and to be sure it never does so again. The content is contrary to our values and we deeply regret this lapse.”

They also followed up with a financial Mea Culpa to the folks over at RAINN.

I have to say that the ad is pretty disgusting. That said, I bet the guy who posted it is getting a raise and not a pink slip. People won’t stop drinking Belvedere because it inadvertently endorsed rape. They will however have the name in the front of their mind the next time they go to the liquor store.