Bill Gates is One Crazy MOFO

“Not only poor people should experience this.” .. Ya 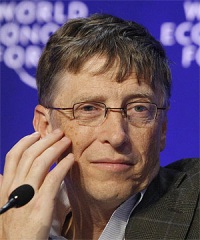 Bill Gates is a whacko. This week at the Technology Conference, TED, he released a swarm of mosquitoes into a room full of people.

He was giving a talk about malaria eradication, which is a big issue for his philanthropic foundation and must have felt that this would be the way to drive his point home.

When he released the bugs he said:
“Not only poor people should experience this.”

Among the crowed were the founders of Facebook and Ebay, as well as several people who thought it was more important to tweet the event through twitter than to leave the room. On a Side note, Youbentmywookie’s Twitter ID is “youbentmywookie.” Be sure to follow us.