Well now there’s a new movie about an Epic Santa on the horizon and its going to be directed by Colin Brady. It is set to be a very expansive trilogy that makes LOTR seem like an episode of the wiggles. 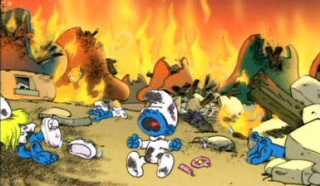 Recently, it was announced that L. Frank Baum’s The Life and Adventures of Santa Claus would be adapted into a CGI feature, directed by Tom Tataranowicz, Rich Arons and Dick Sebast. What makes the story different is that Santa was the hero of a huge, fantasy battle story. He’s not just the gift giving bowl full of jelly.

I’m not exactly hopeful about these Santa films, not from either production company. Despite all of the links to Pixar that Lumenas want to force into Brady’s bio, his only previous feature film as director, Everyone’s Hero, is really quite bad indeed. On the plus side, he had been attached to the Smurfs feature film, so I’m thinking that one’s gone off the rails.