That’s why I find it even more confusing when people who are clearly very intelligent would do something so stupid like implant large electronic devices under their skin.

I understand and respect people with most Tattoos. I think that there are some that are just stupid, but a lot of them look great and make for a great way to express yourself. That said, when you start doing things like gauged piercings and sub dermal implants that cause permanent damage to your body, I have to question your intentions and your brain power. That’s why I find it even more confusing when people who are clearly very intelligent would do something so stupid like implant large electronic devices under their skin.

The braintrust behind this are the Pittsburgh-based biohacking collective Grindhouse Wetware and what they’ve created in a silicone implant with LED lights that’s activated by magnets. 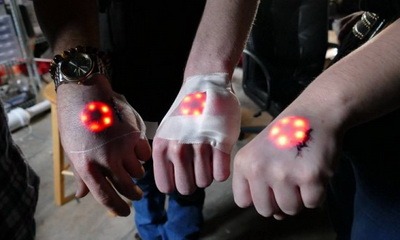 The surgical implantation took place last weekend in Germany and took just 15 minutes for each of the three participants. Despite the placement of the devices on the back of their hands, where there’s all kinds of tendons and crap you can screw up in a major way, they are claiming that the implants ( called Northstar V1) are “well-engineered and safe”.

The biohackers claimed that the inspiration for the device comes from animals like jellyfish and fireflies who have a natural bioluminescence, and that it can serve great aesthetic purposes like backlighting existing tattoos.

To activate it, you just have to place a magnet directly on the device (through your skin) and then the the device with light up and flash for 10 seconds. It is estimated that the battery in the device will allow the user 10,000 uses before it needs to be replaced.

As to why in the hell they’d make something like this, the Grindhouse collective cofounder, Tim Cannon had this to say:
“You know, people from the biohacking community wanted it. They contacted us because they wanted to light up their tattoos. That’s how we generate our implants, we let the community inspire us.”