Buy Your Own Delorean Time Machine, Plutonium Not Included

Touted as “the most screen accurate Back to the Future Delorean Time Machine replica,” the pop culture icon can be yours for a cool $89 grand. 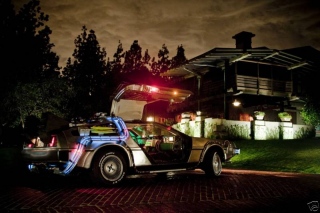 According to the seller, changes in his/her life are forcing them to part with it and it’s built from a stock 1981 Delorean DMC-12 entirely by Gary Weaver, owner of www.bttfparts.com. Amazingly, the vehicle also comes with a dizzying array of features not found in most Time Machine replicas:

• Built on a beautiful, super-clean, stock 1981 5-speed manual transmission DMC-12 with over $16,000 of mechanical work and upgrades performed at DMC California in September of 2008. Approx. 78K miles on vehicle.
• Programmable time circuits which function just like those in the film.
• Functioning digital speedometer on the dashboard (reads actual vehicle speed).
• Main Time Circuit switch functions just like in the film, with all sound effects.
• All interior indicators and switches light up, just like in the film,
• Sound effects for door openings.
• Includes “Plutonium rods,” which can be loaded in to the “reactor” on the rear of car, just like in the film.
• Exterior flux band lighting
• Custom “95 MPH” in-dash speedometer like the one mocked up for the film. The stock Delorean speedometer only goes up to 85MPH.
• Screen-accurate “OUTATIME” metal-stamped license plate with 1986 registration tag.
• Eagle Goodyear GT tires, as seen in the film (not pictured).