Nothing says typical dad more than Darth Vader telling a young Luke Skywalker to stop blowing bubbles in his glass of blue milk.

This might be one of the coolest Star wars books that we’ve seen in a while. Jeffery Brown has created a charming and very funny alternate universe where Darth Vader wasn’t a whiny, dead beat dad and actually had a hand in raising is whiny kid, Luke Skywalker… Ya. he was pretty whiny for a while there.

The book captures all the typical father son experiences like going to the toy store, playing ball and even going to the bar with dad. Actually, I can’t say that my dad ever took me to a bar. Apparently Darth Vader works off the Homer Simpson book of parenting.

To help promote the book, the publisher, Chronicle Books, has put out some of the great art from the title as well as this fun little trailer that we tracked down on YouTube. 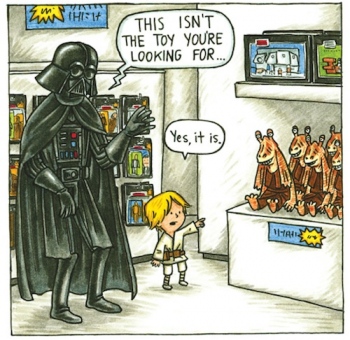 Official Description:
What if Darth Vader took an active role in raising his son? In this hilarious and sweet comic reimagining, Darth Vader is a dad like any other—except with all the baggage of being the Dark Lord of the Sith. Celebrated artist Jeffrey Brown’s delightful illustrations give classic Star Wars® moments a fresh twist, presenting the trials and joys of parenting through the lens of a galaxy far, far away. Life lessons include lightsaber batting practice, using the Force to raid the cookie jar, Take Your Child to Work Day on the Death Star (“Er, he looks just like you, Lord Vader!”), and the special bond shared between any father and son.

Jeffrey Brown is the author of numerous graphic novels and comics, including Cat Getting Out of a Bag and Cats Are Weird. A lifelong Star Wars fan, he lives in Chicago with his wife and five-year-old son.

If you want to get the book, you can pre-order it HERE