DC Announces Identity Of Gay Hero. Proves They Are Weaker Than Aquaman

Nice Move DC, make the one character whose weakness is wood as your new gay character.

It was a big deal last week when DC comics announced that it would be relaunching a “major character” from their universe as homosexual. It turns out that the statement was almost as weak as the death of Superman.

The character has not been announced.. it is Alan Scott. Who? Alan Scott. He was the Earth 2 Green Lantern. They couldn’t even give it to one of of the Earth 1 Lanterns? Come one… I’d believe that Guy Gardner was gay in a second! 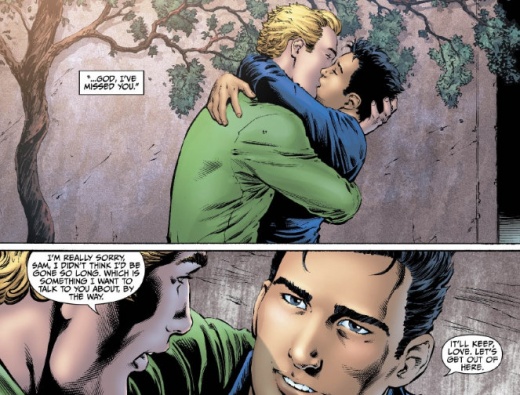 The point is… this is weak. Alan Scott is not a major character. Wonder Woman… you know the one that comes from an island of butch ladies who hate men? That would be major? Any of the Robins? Major? Plastic Man even… Not Alan Scott.

In the comics, Scott’s weakness has always been wood. No, not a joke… that is serious. You have to think that had to come up in an editorial meeting somewhere along the way.

The point is this. DC made an announcement that this would be major. Then, they took the one type of character who there are literally more than 7,000 of (There are 7,200 Green Lanterns) and they made one gay. Bravo DC… That was a bold and Brave move you made there. I wonder if you also patted yourself on the back after hanging a bunch of Kony2012 posters in your favorite Starbucks?

On the upside, the stupidity of Making Alan Scott gay is nowhere near as dumb as the response by the “One Million Moms.”

*Interesting note… at the time of this article, the One Million Moms Facebook page has only 47,519 likes.

“Why do adult gay men need comic superheroes as role models? They don’t but do want to indoctrinate impressionable young minds by placing these gay characters on pedestals in a positive light.”

Thank You One Million Moms. Your ignorance is a breath of fresh air in a world of rational thought.

GLAAD had a more reasonable response to the the moms.
“The idea that a comic book character will make young people gay is as outlandish as saying it will give them a green power ring and the ability to fly. Even more outlandish is the idea that there are ‘one million moms’ who believe this hate group’s anti-gay nonsense. From Christian churches to sports fields, to now even fictional comic book worlds, our culture overwhelmingly supports gay and lesbian Americans and that’s what anti-gay groups like this are working against.”