Detroit Tiger’s slugger Magglio Ordonez is currently auctioning off his trademark Samson like locks for charity. The starting bid for his dark brown curls? A mere $5,000.

Detroit Tiger’s slugger Magglio Ordonez is currently auctioning off his trademark Samson like locks for charity. The starting bid for his dark brown curls? A mere $5,000.

But what is $5,000 to a Tigers fans especially when it’s for the Imerman Angels charity, a cause that helps cancer patients.

Ordonez who has recently been struggling at the plate told reporters that “It just felt like time” to get a haircut — his first in five years. It’s believed that the change is an attempt for Ordonez to bust out of his season slump in which he was even benched for close to a week by Coach Leyland.

The change seemed to have paid off, as Ordonez hit the go-ahead home run in the Tiger’s 6-5 victory against the Chicago Cubs on Thursday.

The auction ends July 4th, and in addition to Ordonez’s locks, which as MLB.com pointed out is a part of Detroit baseball history, the winner will also win an autographed autographed game issued baseball bat and his personal skybox for the September 15th, 2009 Tigers game.

It’s interesting to note that Los Angeles Angels’ free swinging dreadlocks wearing Vladimir Guerrero also chopped off his locks in an attempt to bust out of a season long slump. Like Ordonez, Vlad hit his first home run since April 12 after sporting the new look. 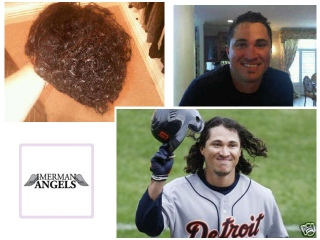