The condoms come 30 per pack and retails for $11.99 with the slogan “We won’t be screwed! We will come first!”

File this under not sure if genius marketing or exploiting a protest. But Condomania has released a series of condoms called Occupy Condoms that promises to be “99 percent effective.” A clear nod to the 99 percent of Americans who have been disenfranchised by the economy who these protesters say they represent.

The condoms come 30 per pack and retails for $11.99 with the slogan “We won’t be screwed! We will come first!” According to Condomania, they are essentially being sold at 70% discount to show support for social change.

The condoms will also be handed out for free per request by the company for those participating in the movement across the country.

From their page:
Occupy Condoms! Why? Whether or not you agree with the “demands” of the Occupy Wall Street movement that is sweeping the U.S., one thing is for sure; lots of people out there are tired of feeling screwed. Occupy Condoms say it all in a neat little package while affording young protesters the protection they need to stay safe in the passionate frenzy that is social protest.

Occupy Condoms are sold at a 70% discount to demonstrate our support for social change and the virtuous pursuit of equality for all. Mostly, we didn’t think it cool to be capitalizing quite so blatantly on a protest movement that itself is concerned about unscrupulous profiteering. So, we’ll just hope for some good buzz and a small amount of unscrupulous profits.

Contact Condomania to request free Occupy Condoms for the Occupy Movement in your city! 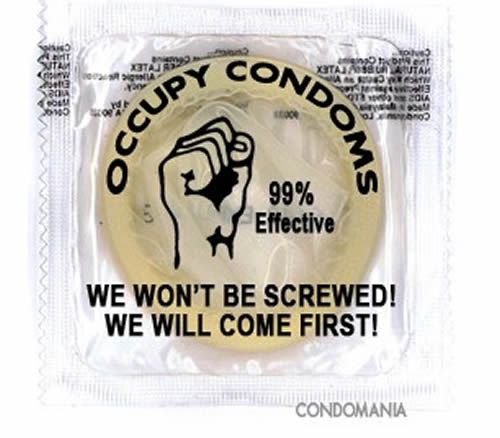