As I sat there, watching this video, I couldn’t help but ask myself one very important question… how the hell did they manage to not get arrested while filming this? The rap group Buckwheat Groats ambushed a McDonalds and filmed an epic rap video that combined the fast food chain with everything you could want in a hip hop video… mainly, lots of half-naked women dancing on the tables.

As much as I didn’t want to like this video for the first minute or so… I know that I’m going to be walking around singing “Million Dollar Menu, F*#Ker Dollar Menu!” in my head for the next week.

I couldn’t track down the lyrics for this song, but here is a very interesting bio of the group from their Facebook Page:
We are the almighty Groat Army – strong and united. We as a group vow to plunder the rectal portions of those who stand against us. By “liking” this page, you agree to sacrifice your own life if you fail to anally sabotage any player haters via insertion of mango, eggplant, or other fresh produce.

Penis Bailey The Bailey and Little Dinky (now Lil’ Dinky) were born out of a pile of goat shit in Grunwald, Poland circa 1427. After years of cobbling and sucking off wild animals (sometimes for as little as a nickel), they decided they had had enough and formed a rap group. Endorsed by the Supreme Lord Satan, our heroes now spend their time being international hip hop sensations and having extramarital butt-relations with many peoples’ aunts. They are also best friends 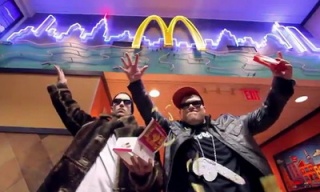