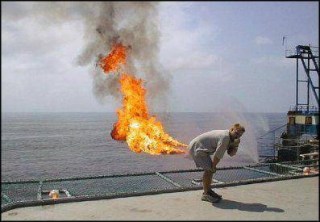 A West Virginia man who was accused of cutting the cheese and then trying to fan it toward a police officer is no longer facing charges for battery.

The Kanawha County prosecutor’s office requested that the charge be dropped against 34-year-old Jose Cruz. He was pulled over Tuesday for driving without headlights on. The police said he smelled like alcohol, was slurring his speech and failed three field sobriety tests before they arrested him on a DUI Charge.

According to what is said in the criminal complaint, Cruz farted and then made a fanning motion toward patrolman T.E. Parsons after being taken for a breathalyzer test. The account stated:”The gas was very odorous and created contact of an insulting or provoking nature with Patrolman Parsons.”

While Cruz admits to having dealt it, he says he didn’t move his chair toward the officer nor aim his fart at the patrolman. He said he had an upset stomach at the time, but police denied his request to go to the bathroom when he first arrived at the station.

Cruz also denies being drunk and uncooperative as the police complaint alleged. He said the officers thought the gas incident was funny when it happened and laughed about it with him.

While he’s been cleared of his stink related charges, he still faces the charges of driving under the influence and driving without headlights… as well as two counts of obstruction.