The US Government has officially released the memo sent to the director of the FBI in 1950 describing the UFO incident in the New Mexico Roswell desert.

The truth is out there if you want to believe it…

The US Government has officially released the memo sent to the director of the FBI in 1950 describing the UFO incident involving three “flying saucers’ and the recovery of alien bodies from the New Mexico Roswell desert.

According to the memo released and show below, three unidentified flying saucers were discovered, each one occupied by three “human shaped” bodies that were three feet tall. They were “dressed in a metallic cloth of a very fine texture.”

The memo was written by Guy Hottel, the special agent in charge of the Washington field office in 1950, and was addressed to the director of the FBI, J. Edgar Hoover.

For those who are still in denial, the image and report comes from our government’s very own newly launched FBI blog, “The Vault,” which show cases documents from the Bureau’s past.

Michael Luckman, director of the New York Center for Extraterrestrial Research, calls these documents a step toward full disclosure.

While the International Business Times says the memo is merely a larger alien hoax. It could be argued that, if their account is correct, that the real conspiracy may be in trying to convince people that there actually is a conspiracy. 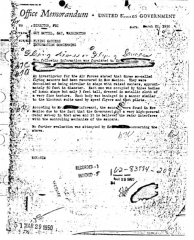