Your first look at the Detroit’s new Robocop statue which is expected to be based off the Robocop design from the first film.

A few weeks back we wrote about a Kickstarter project seeking $50,000 to help fund the construction of a Robocop statue for the city of Detroit. Well after a few days, the Detroit Robocop statue reached its goal in fully crowd-sourced funding!

Since then, io9 has spoken with the brains behind the Detroit Needs A RoboCop fundraiser, and got an early sneak peek at what this awesome statue could look like.

According to Pete Hottelet, a major investor in the Robocop statue, rights for the likeness was generously offered by Fred Barton Productions. It will be based off the Robocop from the first movie and possibly even more screen accurate than the onscreen counterpart! While Robocop won’t have his gun, he will be sculpted with his arms to the side in a “heroic, and poised for action in service of the public trust.”

Below is a preview of what the statue could look like. The bust featured is a creation of Fred Barton Productions and is also currently available for sale. 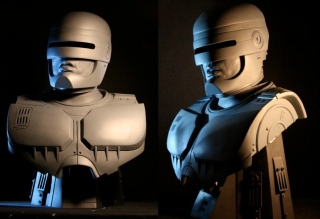 To read the rest of the interview, head on over to io9.