Last week millions of people watched the viral video of the epic lip dub marriage proposal. Now, Second City is here to flip the coin with this epic Lip Dub Divorce video! Sure, the original was plenty sweet, but this new version is a lot funnier… and sadly it is probably a lot more realistic.

Just in case you missed out on the original video, which has been viewed several million times, here it is: 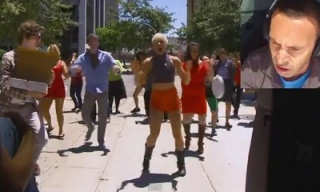