Gag Me With A Toon 4 – Amazing Art Show Inspired By Your Favorite Cartoons!

Check out some of the most amazing cartoon-inspired art that you’ve ever seen this weekend at the Gag Me With A Toon 4 Show!

We love geeky art, especially when it is inspired by all of our favorite cartoons! The WWA Gallery in Culver City CA is putting the final touches on their newest show that premiers this weekend, “Gag Me With A Toon 4 Fvck Yeah!”

The show features art inspired by everything from Garfield to He-Man, The Jetsons, Scooby Doo, Evangelion and a whole lot more. There are tons of amazing artists who will be showing off their works including: Jhonen Vasquez (Creator of Invader Zim), Misaki, Timony Siobhan and Lou Pimentel. I wish I lived out west because I’d be there opening night.

If you live in the LA area head over to the WWA Gallery to check out this sweet art show. The show opens this Saturday (March 17th) and will stay open until April 14th.

Here is a taste of the amazing art they will be featuring at the show: 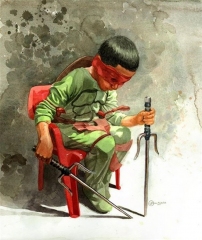 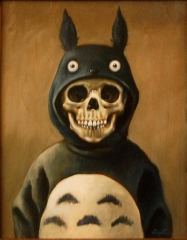 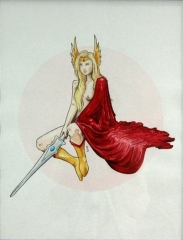 Official Release:
Gag Me with a Toon 4

Get zapped back to the Saturday mornings of your youth this March as WWA gallery hosts the fourth annual Gag Me with a Toon exhibition curated by Steven Daily and Tomi Monstre. Action packed and full of fun, the event will feature over 70 contemporary talents paying homage to, or otherwise dementing the memory of, our beloved Saturday morning cartoons.

The creation of Steven Daily, Gag Me with a Toon began as a nod to the cartoons of the 80s that influenced his and many of his peers artistic styles. Now exceedingly popular, the show has moved to WWA gallery in order to accommodate all the artists eager to participate and its anxiously awaiting fans.

Along with the change in venue, Gag Me with a Toon has also broadened its scope to include shows from the 70s and 90s as well. So no matter when you plunked yourself drooling in front of the old tube there is sure to be a piece that will transport you back to simpler days.

Open to the public, the gallery reception for Gag Me with a Toon is from 7 – 11pm on Saturday, March 17th. The exhibition will run until April 21st, 2012.

You just cannot miss a show packed with this much talent:

WWA gallery and the curators are so excited about the opening that we have set up a few place where we post updates and special announcements about the show. Check us out on Facebook, Tumblr, and Twitter!