A member of the 501st Legion, Johnson modded a McDonald’s Happy Meal Stormtrooper toy into a badass hood ornament for his Buick Park Avenue. 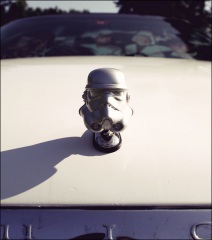 Wanna know how to gain more geek rep? Do what Flickr user Agent RayBans (Hayes Johnson) did and custom mod your very own metallic silver Stormtrooper hood ornament for your car.

A member of the 501st Legion, Johnson modded a McDonald’s Happy Meal Stormtrooper toy into a badass hood ornament for his Buick Park Avenue. Here’s what he had to say about the modification:

The main component of my hood ornament is made from the head off of a McDonald’s toy. If you search online, it’s the one of a Stormtrooper driving a wind-up AT-AT. I removed the head from the rest of the toy, making sure to take out the spring that made the head bobble. I then filled the hollow head with resin, and drilled a hole into it that would serve as the mounting point. After I sanded the head with fine grit sand paper, making sure it was extra smooth, I painted the head metallic silver.

Next I removed the existing hood ornament from my car, which took some finesse and elbow grease. I removed the Buick emblem, but made sure to keep the base that actually mounted to the car. I then bought a nut and bolt from the local hardware store. I pushed the bolt up through the hole in the base of the old hood ornament, and screwed the nut down to hold the bolt in place. Then, finally, I screwed the Stormtrooper head down onto the bolt into the hole I had drilled earlier. Once that was done, I mounted it onto my car. Tada!

WORD OF CAUTION: While having your own Star Wars hood ornament is +10 to your geek rep. It’s a -20 when it comes to helping you get with the ladies. Proceed with caution. 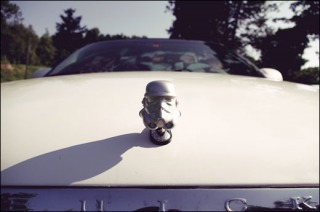