Cerrie Brunell, who was born with one arm, has recently been a victim of a campaign by parents who complained that she is not suitable to appear on TV because her disability scares children. 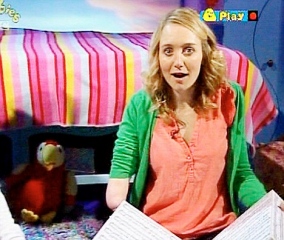 Cerrie Brunell, 29, who was born disabled with one arm, has recently been a victim of a disturbing campaign by a group of parents who complained and claimed that she is not suitable to appear on the digital children’s channel because her disability scares children.

Trouble began last month after Miss Burnell and co-presenter Alex Winters took over the Do and Discover slot and The Bedtime Hour program. Almost instantaneously, vicious and troubling complaints began to pour into the BBC and on parenting message boards from concerned and enraged parents.

Parents complained that Burnell’s disability could scare or give their children nightmare. Many have banned their children from watching the channel all together. Some reported the burden of having to deal with the sensitive issue of disability too soon with their young children. While others have rallied toward Miss Burnell’s removable from the program and accused the BBC of hiring her solely based on ‘political correctness’ in order to meet employment quotas.

Not all messages received have been negative however, some parents support Miss Burnell and the idea that various people are shown on screen. Miss Burnell, a parent herself of a four-month-old daughter, has since fired back at her critics labeling them “terrible” and “small minded.” Support has also come from friends, family and especially disability groups who have fiercely defended her and the BBC.

John Knight, of charity Leonard Cheshire Disability, said: ‘Disabled people experience disadvantage and discrimination like this every day, largely through ignorance. This needs to change.

‘Understanding disability all comes down to familiarity. The bottom line is that seeing disabled people on television should be the norm, not the exception.’

While a friend of Miss Burnell has said: ‘It’s shocking to think that people still have these views and, even worse, that they are passing on this discrimination to their children.’