Advice to young geek boys everywhere: there are some girls you date and some you marry. She’s definitely the kind your marry. 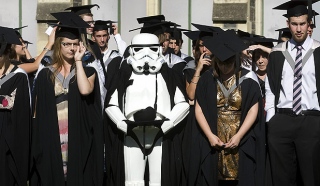 Geek girl, Manja Pieters, 36, is one of 1360 Canterbury University students to graduate this week, and she paraded through central Christchurch in a Stormtrooper costume yesterday before receiving her Bachelor of Fine Arts degree, majoring in film.

“I have graduated a few times before and I thought, `This is my final time – I’m going to go out with a bang’,” she said.

“I also wanted to bring a few smiles to people’s faces. It’s been tough, with the recession and redundancies.”

According to Pieters, she grew up with movies such as Star Wars and directors like George Lucas and Steven Spielberg, who inspired her to study film.

“It’s really a salute to the people who have supported me. They know I have a sense of humour,” Pieters said.

Pieters, who had to remove her helmet to be capped, said some people appeared intimidated by the outfit, but “I’m short so I’m not that imposing.”

Advice to young geek boys everywhere: there are some girls you date and some you marry. She’s definitely the kind your marry.