Get Drunk On These Cocktails Inspired By Great Works Of Literature

Now you can get stupid drunk and still feel like a smarty!

Now you can get stupid drunk and still feel like a smarty! If you are looking for a good reason to get drunk this weekend, other than the fact that Saturday marks the end of Amelia and Rory Pond’s time on the Tardis, you can finally do it and say that you are just paying tribute to great literature.

Whether you are a fan of Lolita, Catcher in the Rye or Alice In Wonderland, we’ve got the drink recipe to get you so hammered that you’ll feel like you’ve fallen down the rabbit hole. 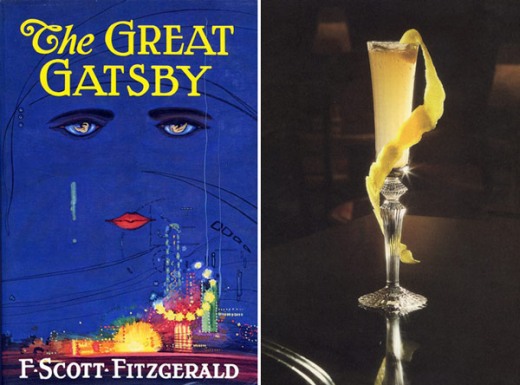 Though we were tempted to pick something bright red for our Lola, we think the Amaretto Sour might be her drink — sweet enough that she’d like it, serious enough that it would make her feel grown up. Not to mention the fact that that very tension between the playfully sweet and deadly serious also happens to be one of the joys of the novel — so why not indulge all the senses?

The Catcher in the Rye

We know Holden is a Scotch and Soda man himself, but it’s the Old Fashioned that most reminds us of existential angst and dark evenings in New York City in the fifties (or today, really). But don’t be a phony — only drink this if you’re a real whiskey fan.

Not only will you feel as though the salt spray is hitting your face with every sip, but you can rest assured that your reading will not be interrupted by bouts of scurvy. And that’s very important for long sea voyages, you know.

While reading The Great Gatsby, you should really drink the cocktail that most lets you indulge in your own fancy 1920s fantasies — for us, it’s the oh-so-classy (and time period appropriate) French 75, which originated in 1915 at the New York Bar in Paris. Yes, it’s ever so chic, my darling. Plus, you can thrill in solidarity with Fitzgerald — whose favorite drink was gin (harder to smell on the breath, you see).

Both Peru and Chile claim the creation of pisco, that delicious grape brandy, and liquor die-hards from both countries have been arguing over its true origins for years. So we think it’s only proper to take a glass to power you through an equally tempestuous novel by our favorite Chilean novelist. But hey Peru, don’t read anything into this — we’re not taking sides.

Death in the Afternoon

We know this cocktail is a Hemingway classic, but come on — what better to fuel your trip down the rabbit hole than a hallucinogenic, celebratory mix of absinthe and champagne?

Relax; you’ll be here for a while. No, we didn’t just pair these two because of that “long” in the title (though the thought has obviously crossed our minds). We think the cocktail is perfect for Wallace’s mix of high brow and low brow, his critique of American entertainment, and the number of elements you’re likely to encounter in any given chapter. And yes, Long Island Iced Teas are usually enormous, and you’re going to need quite a few before you finish.

Just like this scandalous epistolary novel, the Kir Royal is French, foppish, and very likely to put a few sexy ideas in your head.

The Sound and the Fury

[Recipe via The New York Times]

Though we’re not sure that the man who famously opined that ”civilization begins with distillation” would go to all this trouble to get some drink in him (we’ve heard he favored the Mint Julep, or a whiskey), the rest of us get a little slack. After all, a complex, maddening, amazing Southern classic deserves to be drunk while reading one of the same.