Over the weekend last Saturday, thousands gathered in 11 cities across the planet to celebrate Smurfs, for Global Smurfs Day 2011.

Over the weekend last Saturday, thousands gathered in 11 cities across the planet to celebrate the birth of Peyo, the man invented the Smurfs, for Global Smurfs Day 2011. The gathering also brought forth and set a new Guinness World Record for the “Largest Gathering of People Dressed as Smurfs within a 24-hour Period in Multiple Venues” when 4,891 individuals dressed as Smurfs showed up.

The record was announced by Marc Weinstock, President, Worldwide Marketing for Sony Pictures Entertainment. Mr. Weinstock commented, “It’s a thrill to see so many people turn out to be a part of this true fan moment in Smurfs history. Breaking a Guinness World Record on Global Smurfs Day is a testament to the enormous appeal and popularity of these beloved characters.” (Galatta) 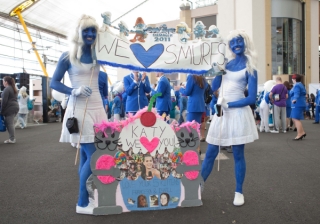