Using jellyfish protein, cats were genetically modified into producing a litter of kittens that can glow green under UV light. 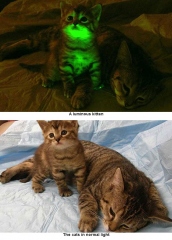 Yes, as silly as the title sounds, researchers at the Mayo Clinic have successfully created glow-in-the-dark kittens to help combat and find a cure for AIDS.

Using jellyfish protein, cats were genetically modified into producing a litter of kittens that can glow green under UV light. But more than being luminous, they are also resistant to feline AIDS making the achievement a critical step towards “disrupting the mechanism by which HIV destroys the human immune system.”

The glow of course isn’t just for show. It helps researches see whether the macaque treatment is effective in a living animal.

The Mayo Clinic explains that though there are no immediate applications for HIV sufferers, it holds potential for understanding of the disease:

The macaque restriction factor, TRIMCyp, blocks FIV by attacking and disabling the virus’s outer shield as it tries to invade a cell. The researchers know that works well in a culture dish and want to determine how it will work in vivo. This specific transgenesis (genome modification) approach will not be used directly for treating people with HIV or cats with FIV, but it will help medical and veterinary researchers understand how restriction factors can be used to advance gene therapy for AIDS caused by either virus.