Aren’t you sick of those boxy, unattractive, gas guzzling hearses?

Aren’t you sick of those boxy, unattractive, gas guzzling hearses? Thankfully, that might soon be a thing of the past. We are on the cusp of a new age, the age of self-driving vehicles. Sure, Google is already making it happen, but Charles Bombardier is making it happen where it really counts… for dead people. 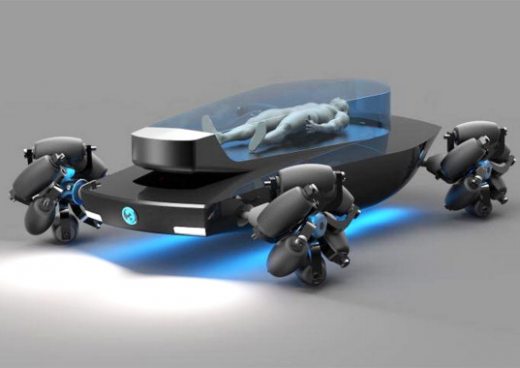 He calls it the Korbiyor, a riff on the french term corbillard, which means hearse. To be honest, I kind of want one of these already, but think the idea of wasting it on the dead is silly. The vehicle features a transparent and refrigerated coffin, Mecanum wheels that can move in any direction and a hydrogen fuel-cell powertrain.

Because it is primarily designed for funerals, it has two navigation modes. You can either program in a destination or you can have it follow people walking in a funeral procession. And, because funerals are so boring they usually end up making you wish you were the one in the box, the Korbiyor comes equipped with a multimedia projector and sound system to play images and music during the procession.