That means that Godzilla has always been an illegal alien every time he’s set foot into (or onto) Japan.

Other than his rare (and disappointing) visits to the US, Godzilla has generally been considered to be Japanese in origin. That said, he’s never actually managed to get his papers in order. That means that Godzilla has always been an illegal alien every time he’s set foot into (or onto) Japan.

Now, the Japanese Government has moved to give the titanic lizard honorary citizenship to the land of the rising sun. Check out his papers below:

Date of birth: April 9, 1954 (the year of the release of the very first Godzilla film)

Reason for special residency: Promoting the entertainment of and watching over the Kabuki-cho neighborhood and drawing visitors from around the globe in the form of the Godzilla head built atop the Shinjuku TOHO Building. 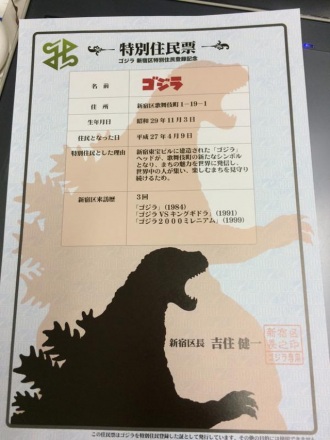