Gossip Girl Knocked up My Daughter!

In other news, despite this study and the increase of crappy shows like 90210 and the Hills, another study has just found that teen pregnancy is on the decline. 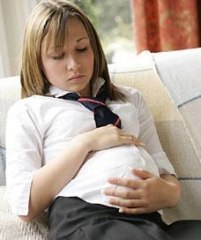 Reuters is reporting on a new study that links teen pregnancy to watching sexy TV shows. The study by the Rand Institute, say that these corrupting programs: “leading teens who watch sexy programs into early pregnancies and children who play violent video games to adopt aggressive behavior.”

“Our findings suggest that television may play a significant role in the high rates of teenage pregnancy in the United States,” said Anita Chandra, a behavioral scientist who led the research at RAND, a nonprofit research organization.

While the study does not establish causation, they do believe it is a factor.

The researchers recruited adolescents aged 12 to 17 and surveyed them three times between 2001 and 2004, asking about television viewing habits, sexual behavior and pregnancy.

The findings covered 718 teens, 91 of them got knocked up. According to the study, the top 10th percentile of kids who watched sexy shows were twice as likely to end up with a bun in the oven.

The study focused on 23 free and cable television programs popular among teenagers including situation comedies, dramas, reality programs and animated shows. Comedies had the most sexual content and reality programs the least.

In other news, despite this study and the increase of crappy shows like 90210 and the Hills, another study has just found that teen pregnancy is on the decline.