The show may be called “Believe”, but the audience wasn’t buying it and spent most of the evening stifling yawns. 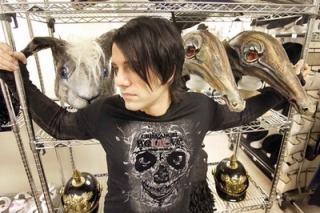 A reporter from the LA Times just saw the new Criss Angel/ Cirque Du Soleil show in Vegas and the reviews stink worse than that month old lo mein in the back of your fridge.

“Reporting from Las Vegas — If Criss Angel were blindfolded, straitjacketed, run over by a steamroller, locked in a steel box and dumped from a helicopter into the Pacific Ocean, he still might be easier to salvage from disaster than “Criss Angel: Believe,” the gloomy, gothic muddle of a show that officially lurched into being on Halloween night like some patched-together Frankenstein’s monster.

The show starts with a video of Angel’s biggest hits before he appears magically and tell’s the crowd he can feel their love.

“Believe’s” framing device is that Angel accidentally receives a 6-million-volt jolt of electricity that fries off most of his face. That’s when he flies headlong into deep hallucinations where he must confront demons and angels that stalk his imagination.

Enter the Cannibalistic Demon Bunnies and the punk clown posse.

The show may be called “Believe”, but the audience wasn’t buying it and spent most of the evening stifling yawns.