Great Grandma Gets Plastic Surgery To Look Like ‘Jessica Rabbit’

Nothing screams WTF more than great grandmother Annette Edwards, 57, who spent £10,000 ($16,000 USD) to make her look like cartoon character Jessica Rabbit from the film “Who Framed Roger Rabbit.”

According to Edwards, she had always loved rabbits and wanted to appear like her fictional cartoon idol, Jessica Rabbit.

She said: “I got my first rabbit when I was eight and it became my best friend. I would play with it for hours, we were inseparable.

“Growing up I’d always been fascinated with the cartoon character Jessica Rabbit. I thought she was stunning and for years I longed to look like my idol.

“I sometimes get stopped in the street and have had loads of nice compliments.”

Edwards claimed that she has been contacted by Playboy about the possibility of a photo shoot. 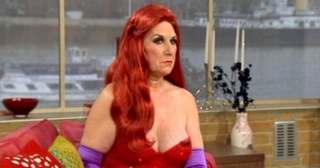