I don’t speak a single word of Portuguese, but this is still one of the coolest proposals I’ve ever seen.

I don’t speak a single word of Portuguese, but this is still one of the coolest proposals I’ve ever seen. it has only been online for a couple of days, but it managed to get over 3,000,000 views without a single mention of Kony2012!

I can’t say that I understand exactly what is going on here, but it looks like the guy has sent his girlfriend on one hell of a little treasure hunt completed with hidden clues on the bottom of her own shoe and under a live turtle! At the end is the payoff. Man, could you have imagined what would have happened if she said no? I’m pretty sure all those little slips of paper would have become kindling for when he burned her house down! 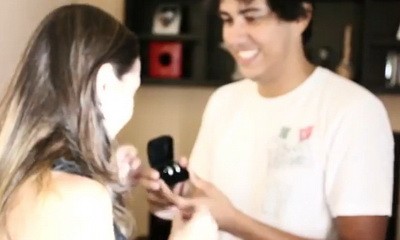