OK, this is cool, but there is no denying that this man is completely ignorant of the fact that he is most likely going to be trading bear hugs for bear bites on his face.

OK, this is cool, but there is no denying that this man is completely ignorant of the fact that he is most likely going to be trading bear hugs for bear bites on his face. He did train the polar bear from birth, but you can’t really domesticate a giant machine bred by nature to kill. It is like those people who get baby chimps and then one day get all confused when it rips their arm off and beats them with it.

Still… I have to admit, I am kinda jealous. I would love to be able to do swim with a polar bear… as long as he didn’t try to eat me.

Official Video Description:
ABBOTSFORD, CANADA: Grizzly man Mark Dumas, 60, is the only man in the world who can touch a polar bear. And as these incredible pictures show the fearless bear handler from Abbotsford, British Columbia, even goes for dip in his swimming pool where he and 16-year-old polar bear Agee enjoy a watery cuddle together. Mark and wife Dawn, 60, train the 60-stone (800lb) friendly beast – the world’s largest land predator – to star in high-budget TV adverts. She has even performed in movies like ‘Alaska’ in 1995 when she was just a few weeks old. With his incredibly intimate bond Mark wrestles on the grass with Agee, kisses her, puts his head in her huge jaws, and even bear hugs her as she rears up on her hind legs to over seven feet. Mark and Dawn have owned Agee since she was six weeks old and the colossal mammal even lived in their home as a cub where she played with the family dogs and was bottle fed. 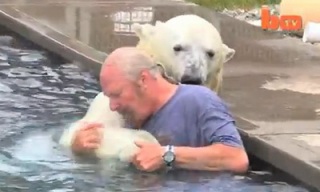