My only question is: Why isn’t Batman punching Catwoman on the cover of Entertainment Weekly?

On July 20th 2012, coming to every freaking theater in the world, ‘The Dark Knight Rises’ will make it’s debut. I don’t know about you, but just saying those words gives me goose bumps. So, to keep us all from going crazy, Entertainment Weekly is whetting our appetite released the following photos. 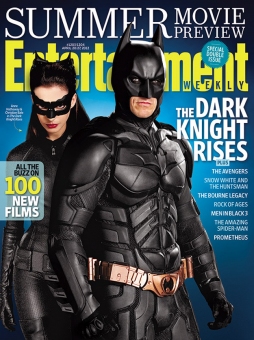 My only question is: Why isn’t Batman punching Catwoman on the cover of Entertainment Weekly?

Official Synopsis:
Eight years after the death of District Attorney Harvey (“Two-Face”) Dent, and the Joker’s catastrophic scheme. Gotham was left in near shambles after Batman accepted full responsibility of the murders committed by Dent, prompting the citizens and police force of Gotham to condemn and capture the Batman. However, in the years following the Caped Crusader’s absence, Gotham City is experiencing a time of peace thanks to Harvey Dent’s inspiration and reputation. In the midst of Gotham, a new threat has risen and plans to destroy and exploit Gotham and taint the good name of Harvey Dent’s memory. As a warning, Selina Kyle warns Bruce Wayne of this threat as she takes on her alter-ego called, Catwoman and waits for the Batman to return. As the police force is in escalation and has failed on capturing this new terrorist, they too seek that Batman must return to stop him. Bruce Wayne must once again take on the guise of the Batman as he confronts his most powerful and dangerous new adversary: the enigmatic, brutally strong, and equally intelligent, Bane