Short Circuit Reboot To Have More Menacing Edge Than Original

Johnny Five Is Alive!… And he wants to eat your brains?

Tim Hill directed the popular kid’s movie remake of Alvin And The Chipmunks as well as the recent Easter Bunny movie, Hop starring Russel Brand. With a foundation of family fare like that, it seems a little odd that he plans to take his next reboot project, a remake of the 80’s film, Short Circuit, and make it darker and more menacing than the original.

He recently spoke with the LA Times and was kind enough to give some details on the project.

“I’m tempted to go back and grab the original,” Hill admits, “But I think it has to be closer to what modern design actually is. There are computer models and labs developing real machines like this… You’ve got to find the balance between something fierce and something endearing. The original was cute. But no one was threatened by it.”

He also took some time to talk about how they will be updating the storyline to make it relevant by making Johnny Five an offshoot of modern warfare drone technology.

“The thing that makes it so relevant is that we live in this age of robots, particularly when it comes to war,” Hill continues. “We have drones that do our fighting for us, do all these jobs men and women don’t want to do. And that’s what makes this so interesting — things like this moment in the story when Johnny realizes he’s going to be disassembled and contemplates death, and whether it’s right to terminate someone else.”

Another big change is that the character who was played by a grown Aly Sheedy in the first film will now be played by a teen or child.

I’m not sure what to say about this yet, but I don’t have a warm and fuzzy feeling in my stomach. 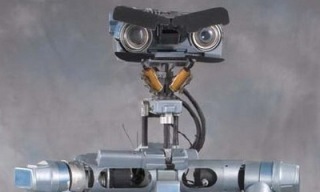