Just imagine what the Hatfields and the McCoys could have done if they had the internet.

Just imagine what the Hatfields and the McCoys could have done if they had the internet. The feud in question has to do with Brian Zechenelly and Brian Jules. It all started when Brian Z. built a big purple house right next to Brian J. This pissed off Brian J (because it apparently makes him so angry that his blood boils) and the rest of his neighbors (because they fear their property values will suffer as a result) to the point that they even sought an injunction with the city to help plead their case against the purple menace. When all else failed, Brian Z did the one thing he could think of to show the world how he truly felt. He mowed a giant “A-Hole” into his lawn with an arrow pointing at the purple house. At least they didn’t shoot each other… yet. 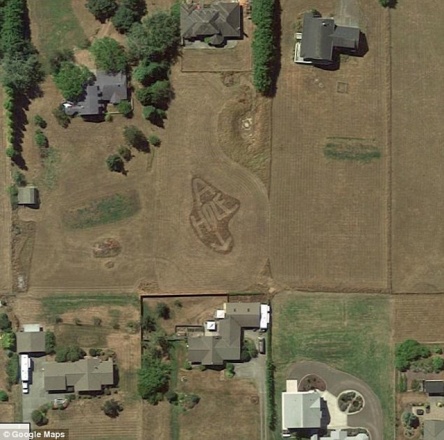 at least two dozen neighbors hated the color so much, they created a petition against it.

The petition requested relief from their property taxes from Clallam County Assessor Pam Rushton, as they claimed their homes’ values were being undercut by the tall, purple building.

Brian seemingly despised the lavender color and the ‘polluted views’ of it from his property.

‘This has become the focal point of the community,’ he told the newspaper. ‘I know people have every right to build whatever they want. But it affects others.’