Hasbro Creates Most Realistic My Little Pony Ever!

Now we just need to find a way to breed some Care Bears. 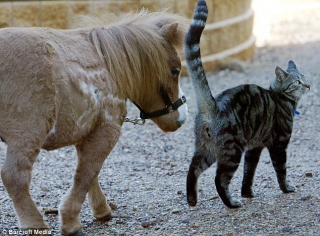 Ok, maybe its not Hasbro, it’s even better! This my little pony is the real deal! The Daily Mail is reporting that Koda the horse has captured the eye of the public.

The Miniature pony is not just miniature… This little guy is actually a Dwarf Miniature Pony. Who even knew that was possible. At just 23 inches tall, Koda is the size of a small dog and his main animal buddy appears to be a cat who is just a little bit smaller than him.

Koda’s condition is rare and Lynch is amazed that he’s still alive and kicking at 13-months-old despite a torrent of health problems.

Brave Koda has had lots of surgery to correct his stumpy, buckled legs but that hasn’t helped his peculiar face. His lower jaw juts out and he has bulging eyes, upturned nostrils and a wrinkled nose.

‘He had a punky look, a fuzzy forelock and his mane stuck up like a mohawk,’ Dr Lynch said.

Koda still has a long way to go before he’s totally in the clear, but for now, this little pony is going is living the life of luxury.

2 thoughts on “Hasbro Creates Most Realistic My Little Pony Ever!”