Hate Big Snails? Well, This One Fits Through The Eye of a Needle!

Fun fact, they came up with the name Angustopila dominikae after the name of the wife of one of the researchers. No, really.

Don’t you just hate big snails? I mean, they aren’t big enough to live in like in Doctor Dolittle, but they are just big enough to be a pain in the ass, right? Well, thankfully, China has just discovered the Micro-Snail. This bruiser measures in at a staggering .86 millimeters and ten of them side by side can fit through the eye of most sewing needles.

The snail is so small, that it looks more like a little white fleck of dust to the naked eye… a speck with a super tiny slime trail. It was actually discovered by accident when scientists brought soil samples back to the lab from limestone rocks in Guangxi province.

The researchers believe that this species, which they are calling “Angustopila dominikae” have been around for almost 60 million years and have always been this tiny.

Fun fact, they came up with the name Angustopila dominikae after the name of the wife of one of the researchers. No, really. 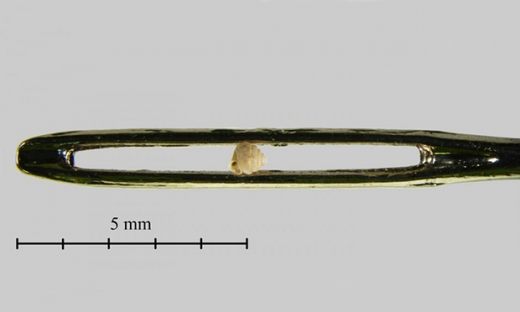