The kissing couple shown embracing on a Vancouver street as riot police battled Canucks fans following their Stanley Cup loss has been uncovered. 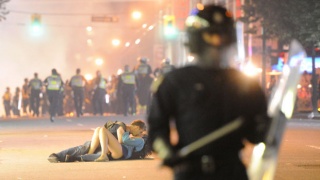 The couple has been identified as Australian Scott Jones and his Canadian girlfriend Alex Thomas.

Following the Canucks’ Game 7 loss to the Boston Bruins on Wednesday night, images of the mysterious kissing couple were seen around the world and became a social media phenomenon.

Many felt the image was photoshopped or staged and the CBC.ca immediately launched a search to uncover their identity.

According to Brett Jones, father of Scott Jones, the couple had been at the NHL final game, and after the chaos following the loss spilled into the street, the two were caught in the violence.

“They were between the riot police and the rioters, and the riot police were actually charging forward, and Alex got knocked by a [police] shield and fell to the ground,” he told CBC News. “[Scott] was comforting her and gave her a kiss to say, ‘It’s going to be OK,’ and the photographer just took the shot at that moment.”

Brett Jones said Scott is fine, and Alex suffered a bruised leg from falling to the ground.

Both Jones and Thomas are overwhelmed by all the coverage the picture has gotten, he said, noting that he has been fielding calls from media around the world.