In The Words Of Yoda – ‘Begun, The Meme Wars Have’

When two countries inching towards an eventual nuclear confrontation take to twitter so they can clap back with memes from ‘Mean Girls’, it might be time to question reality.

This is about global politics and Twitter. No this not about US President, Donald Trump. Love him or hate him, that’s up to you. We don’t deal with messes like that here. What we do mention is stuff so weird that it deserves the tag of WTF, and when two countries inching towards an eventual nuclear confrontation take to twitter so they can clap back with memes from ‘Mean Girls’, it might be time to question reality.

There’s not all that much to the story. The Twitter account attached to the leader of Iran, Ayatollah Khamenei sent out its standard “we hate Israel” message, as it does from time to time. The difference here is that instead of responding with hard words or righteous indignation, the Israeli Embassy decided that the best response was in the form of a meme.

It’ll be interesting to see if the Ayatollah has it in him to escalate this potential meme war, or if he’ll just stick to name calling and the occasional missile. 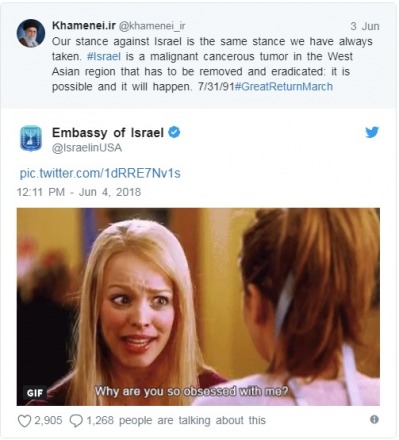 *Note – None of this is to belittle the tension between these two countries. If you want to learn more about it, be sure to read as much as you can from varying sources. The truth probably lies somewhere in the middle of what you’ll find.