This video is awesome, but keep the sound low because the lyrics to Kanye’s song is definitely NSFW

Last week, Kanye West tried to shock the internet with his weird and boring music video for the song, Bound 2, off his latest album. The only reason the net picked up on the video, which was basically just Kanye riding a bike on greenscreen while his topless wife (Kim Kardashian) lay on top of the bike’s instrument panel. It was a trainwreck that tried to leverage a pair of boobs into massive internet traffic.

Enter Seth Rogen and James Franco. They are currently on set, filming the new movie, The Interview. Well, apparently, they had some downtime and decided to film a shot for shot remake of the music video, featuring Franco as Kanye West and Rogen as Kim Kardashian. It is one of those things that you have to see to believe.

In case you haven’t seen it, check out the original: 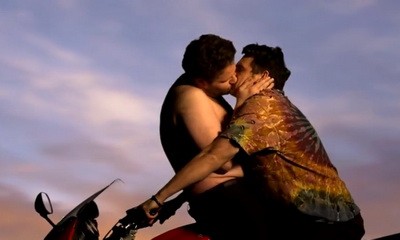