Severely NSFW for The Bob Saget clip we’ve included of the original joke.

These Siri commercials really suck. If Zooey Deschenel really needs to ask her phone if it is raining RIGHT OUTSIDE HER FREAKIN WINDOW and if Sam Jackson really needs his phone to remind him that he’s not going to go play golf… then civilization really is lost. The newest phone features the increasingly creepy John Malkovich. Is it just me or is he becoming more and more like the version of him from “Being John Malkovich” every day?

Anyways, there’s new iPhone/ Siri commercial with him in it. At the end, there is a really stupid joke. Now, some people from the internet have taken to YouTube to see if they could try to make it a little more entertaining. The result is a clean version of The Aristocrats.

If you aren’t familiar with the joke, The Aristocrats is a joke that has been passed down from comedian to comedian for ages. The point of the joke is for each new person to make it even more outrageous and disgusting than the one before it. 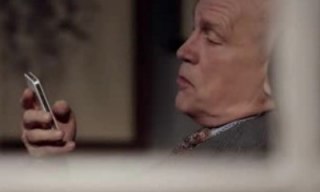